Axel has won or been nominated "Best Actor" 6 different times over 4 different films on the film festival circuit, and won "Best Director-Feature Film" in his directorial debut for "Runways & BunkBeds". He is also an accomplished screenwriter.

Kristen is an actress and producer.

Nikki is an actress and model.

Sarah is an model, singer, and actress.

Cassidy is an model and actress. 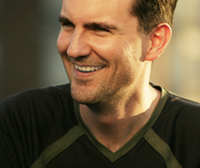 A Michigan native and graduate of Northwestern University, Steve is the founder and CEO of Chapter 3 Media. He has over 15 years experience making movies, working with Jesse Dylan (Kicking & Screaming) and producer Moritz Borman (Terminator 3).

Steve was a storyteller from an early age and later moved to Los Angeles to pursue a career in filmmaking. He worked from the ground-up, volunteering as a production assistant on numerous independent productions until he eventually learned to write, direct, and produce his own films.

Prior to this project, Steve directed The Cabining and My Friend Peter which both earned several awards and festival acceptances worldwide, as well as Starlight & Superfish which was distributed by Vanguard Cinema. The Cabining was available on-demand on every major cable and satellite provider and aired on Encore.

As a creative professional, Steve's focus is to deliver a unique entertainment experience with an emotional punch.

Brion Dodson is an artist, photographer.

Kevin is a graduate of the University of Detroit and holds a degree in mechanical engineering. During the economic downturn Keving went back to his old passion and became versed in filmmaking where he debuted as a camera operatior on the set of Lee Martin's Midnight Hour. He went on to be the Director of Photography with several production companies to include Poison Apple Entertainment, Captive 8 Productions and Ring of Fire Entertainment where he is the DP for the award winnign HIT series.

Jennifer is an accomplished makeup artist, who has worked with some of the biggest names in the entertainment and fashion industries. Check out JenniferSadovsky.com.

He's also a master of about 1,000 different instruments (including the cowbell).

Born and raised in the Detroit area, Wilk attended the University of Detroit Mercy where he was the host of the award-winning internationally-syndicated talk show, Motor City Music Connection. After graduation, he work freelance as a cameraman as well as video editor, and also did voice-over work for various commercial productions. After leaving the industry to pursue more stable employment, he started doing more production work on the side, working as a Production Assistant on various films (as well as a few supporting roles in front of the camera along the way.) In 2012, he was the Art Director as well as Production Assistant on the horror feature, The Cabining. On the strength of this experience, as well as his love for writing, Wilk formed FERAL MEDIA in July of 2013 with the intent of producing his own films.

In June of 2014, Wilk directed and produced his first short film, "Kops." He is at the helm for the short film "Bigfoots," with a November 2015 release.

Jake is a graduate of Grand Valley State University with a degree in Film and Video. He has experience in all areas of production, especially lighting and photography.

Chris Pratt is a musician, sound engineer, and all-around tour-de-force. When not frequenting film sets, Chris spends his time with his band, The Vonneguts.

Brian Hobbs is a photographer, musician, and singer. Brian's true love is belting out ballads, but he also finds time for photography, shooting events of all shapes and sizes with his company Best Ever Media.

Do you want to learn more about FRIENDLIES?